Nick Mead runs the company Tanks-alot. His company aims to bring tanking experiences to those who otherwise would never get the chance to drive or be inside one. His love of military vehicles has led to his unique business that brings in curious customers from all walks of life. It was when he tried to expand the number of tanks he owned that he made a truly astonishing discovery inside the latest member of his fleet.

Not only is Mead a collector, but he is a real tank expert. As well as giving customers an experience inside a tank, Mead rents his tanks out to television shows and movies shot in the UK. He is happy to give people lessons in how to drive these mechanical beasts, and his lessons are open to all-comers. Driving a tank is a unique experience and unless you want to go through all of the military training, services like Tanks-alot are the only way you’ll get to drive one.

Looking to better the experience

Mead runs his business from his farm and after a while decided he wanted to develop the experience for his customers. Although they already enjoyed the experience, he could always find something new to offer them. That led to the expansion of his tank fleet and as he gained more and more customers, he realized he needed more tanks than ever. Mead found that it wasn’t as difficult as first thought to buy tanks so soon he was on the lookout for a new and exotic one.

Although he had been growing his collection over some time he didn’t feel as though it was complete just yet, so he kept an eye out for something interesting. After years of expanding his business Mead has over 150 tanks in his collection, which means he can offer pretty much any kind of tank experience to his customers that they desire. He even has the accolade of being the only tank collector in the world to have a very special model from the British military.

Perhaps his pride and joy, Mead got his hands on a Challenger 1. This tank is made by the British Army and is still used in their operations to this day. But with such a modern and dangerous piece of equipment, people began to question how he came to own such a machine. Perhaps people are worried that someone willing to use this tank for something other than displays might get hold of it and use it against people in the UK.

After searching for new tanks for a while, Mead decided he would like to offer his customers a real movie-like experience. He wanted to find a Russian tank so that people could feel as though they were a part of the James Bond action movie From Russia With Love. After some time, Mead came across the exact tank he had been looking for, now all he needed to do was to come to some arrangement with its owner, and the Russian machine would be his to keep.

The tank he had found was the T-54. Although these particular tanks were built in China they had been used by the Russian Army on numerous occasions. The prospect of having his customers come to his farm and drive a Russian tank was too tempting, so Mead decided he would try and purchase the tank. Mead wanted it so badly he parted with $40,000 as well as a prized weapon and a military truck. Soon the tank would be delivered to Mead and he would make his discovery.

The T-54 tank’s history isn’t fully known, as military forces like to keep their movements a secret. So often it is left to soldiers who used the tanks to inform others of their actions inside the vehicle. When Mead inspected the odometer inside the tank he discovered that it hadn’t been driven too much; it only covered around 1,500 miles. This led to Mead questioning why it hadn’t been driven so much. What was the reason why this tank didn’t get to see as much action as it should have?

Mead began to suspect that the tank had actually been captured while it was stationed out in a war zone. Why else would it not have moved much? It was thought that the tank might have been in Iraq when the dictator Saddam Hussein was in charge. Hussein was believed to have been hiding valuable stuff as his reign looked to be coming to an end, and long after his reign had ended valuable items were being found in hiding places. Was this tank another part of his collection?

Is this full of fuel?

It didn’t appear that the previous owner had thoroughly inspected the tank, so Mead took his time looking at each and every compartment he could access. He even dismantled part of the tank to check for anything hidden away. These machines were used in war, so there was a chance a grenade or some ammunition was stowed away somewhere, and he wouldn’t want that going off unexpectedly. What Mead discovered must have left the previous owner kicking himself when he heard the news.

The first thing Mead did when he got his new tank was to get a mechanic to come along and check the tank over. That was when they made their first discovery; a load of firearms stashed inside. Mead informed the authorities of his find and went back to inspecting the tank, where he would find an even greater discovery – a whole load of gold bars just sitting there! Mead knew if the previous owner had taken a good look he wouldn’t have this gold in front of him.

Hidden in the fuel tank

As Mead’s mechanic went to inspect the fuel tank, he noticed that there appeared to be something hidden inside. Mead needed the tank to be repaired so that he could present the vehicle as an authentic war machine, but now his concerns were elsewhere. When inspecting the fuel tank the mechanic, Todd Chamberlain, took a crowbar to the container and tried to prise it open. That’s where he got the first glimpse of something bright and shiny inside.

Where did it come from?

The more he looked inside, the more gold bars he counted, which left him wondering where all this gold came from! Was this a present from the previous owner, or had the gold found it its way inside while it was still in use? Knowing that the tank had been stationed in Iraq, Mead theorized that the gold was likely belonging to Saddam Hussein. Knowing the history of the tyrannical dictator, Mead thought the gold might have been acquired illegally.

When Chamberlain and Mead first discovered the fuel tank with a mysterious secret inside, they just assumed it would be more arsenal. They had already found a bunch of weapons so they just thought that was what would be inside, little did they know there was a hidden wealth just waiting for them. The pair couldn’t believe their luck, they were staring at something so valuable they didn’t understand how someone could have misplaced it.

Mead couldn’t believe his luck, this was just like winning the lottery! For many people, they could only dream of finding something so valuable by chance. Mead and his mechanic Chamberlain began to worry that others might accuse them of being thieves. They had already found some weapons, but now a stash of gold bars? That might begin looking suspicious. They didn’t want to seem like criminals, but what would it look like if two men in control of a tank suddenly had a bunch of gold in their possession?

A lot of money

If you didn’t know, gold is pretty valuable! Mead began to weigh out how much gold they had found, and even though there were just five gold bars, they had stumbled upon over $2 million worth of the precious metal. Not a bad return for the $40,000, truck, and weapon that Mead sent the person in exchange for his Russian tank! With such a valuable load here on his farm, it must have been incredibly tempting for Mead and Chamberlain to keep this find all to themselves.

They really didn’t know who the gold belonged to so the thought did cross their minds about keeping it, but there was a problem. Just who could claim some of the gold? Mead had filmed the entire tank experience, so there were a lot of people who knew about the gold at this point. If Mead and Chamberlain were going to keep the gold, they would have to split it among everyone else who had been there for the discovery.

Should they keep it?

They struggled with the thought of keeping it or not for a while but decided they should do the honest thing and pass it over to the authorities. Many people in the same position as Mead and Chamberlain would probably have kept the gold, but, knowing the treasure was likely to be acquired through someone’s suffering they chose to pass on keeping it. People who watched Mead’s YouTube video of his discovery thought he was crazy not to keep it, but Mead thought it was better to give it up.

$2 million is a lot of money. Even split between a bunch of people, that is enough to change your life forever. You would have financial security – you could probably buy a house or two, and then be set for life. Even though the golden discovery had the potential to change their fortunes forever, Mead and Chamberlain thought if the gold belonged to Saddam Hussein then they wanted no part of it and chose to wash their hands of the bounty. 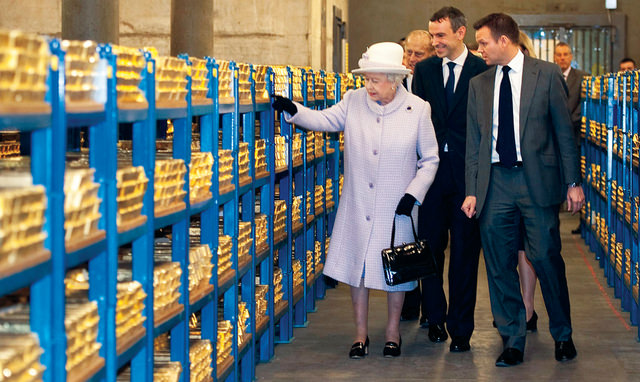 There were five gold bars in total, and even though many might have seen the flashing lights of a brand new car, or tank, Mead felt being honest with the authorities was the right thing to do. Iraq was alleged to have stolen gold from Kuwait in 1990, and even though Iraq was ordered to return what they took, it looks as though some of the valuable items may have remained hidden. Mead also knew there was no way he could change the gold into money so called the police.

Mead was approached by news reporters who asked him if he had any regrets about handing back the gold. He told them that even if he doesn’t get any of the gold back, he will still have the thing he wanted the most, his beautiful tank. The gold might have been acquired unethically originally, but Mead’s honesty ensured that the gold has a chance of returning to its original home. After the treasure discovery, Tanks-alot gained some helpful publicity, as well as a great experience.

Unusual trends that only exist in Europe

The Reality TV Shows That Brainiacs Will Appreciate

You could that the genre of Reality television has pretty much takes over our lives, as you can ...

5 musicians who are actually pretty smart

When it comes to musicians, most people fail to see further than their vocal cords and instruments. ...